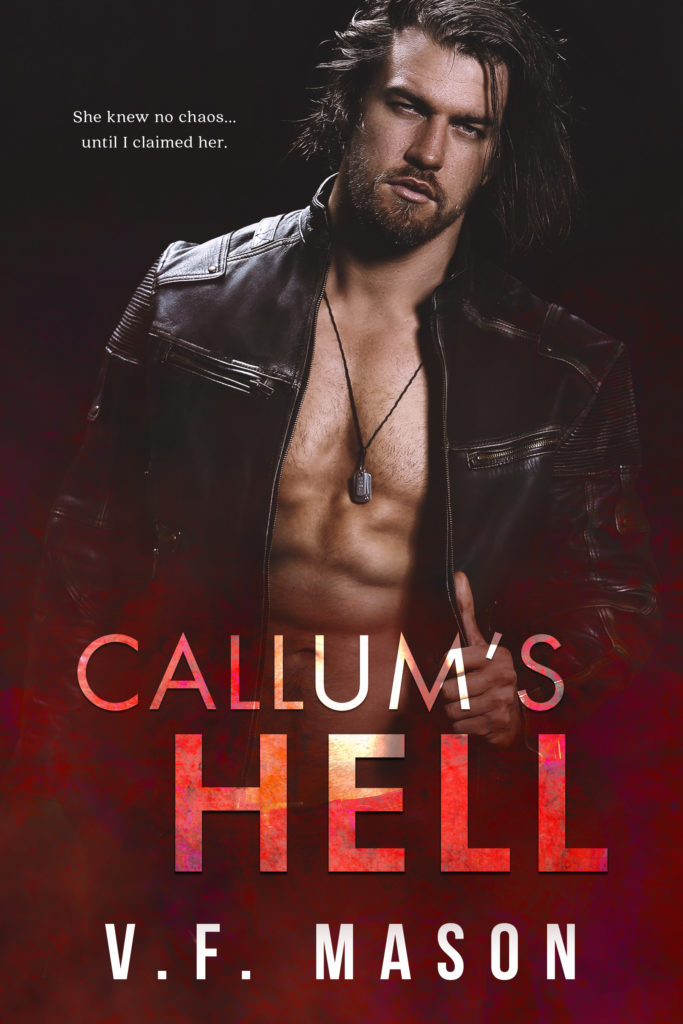 She knew no chaos...until I claimed her. She was a florist. He was a serial killer. She created beauty. He created chaos. She belonged to nature. He belonged to the underworld. She was an angel. He was the devil. She wanted to escape. He trapped her instead. They played a dangerous game with their lives at stake. Where the winner took it all and the loser burned in hell.

Wow. Just wow. I'm not sure if this is a good wow, but it's definitely not a bad wow.

This book was an emotional maelstrom. It started out slow, but reading it was like knowing something bug was coming and knowing it would absolutely wreck you, but you still craved it.

Callum was an enigma. That man had some serious issues, but when it all came together who could really blame him. His childhood was a catch 22 because it was horrid, but it made him who he was and psycho or not, he was beyond successful. The author did a great job of making a villain loveable.

Giselle was hard for me to relate to. I understood her plight and sympathized with her, but I hated how she allowed her family to bulldoze her at every turn, especially her sister. I liked her loyalty, but I didn't like her suffer in silence approach.

There was constant mention of secondary characters and interactions between characters from what I'm guessing were chcharacters from other books, but there was no depth outside of a few of them, which got to be irritating after a while.
Overall, I liked the book and would read more from this author. 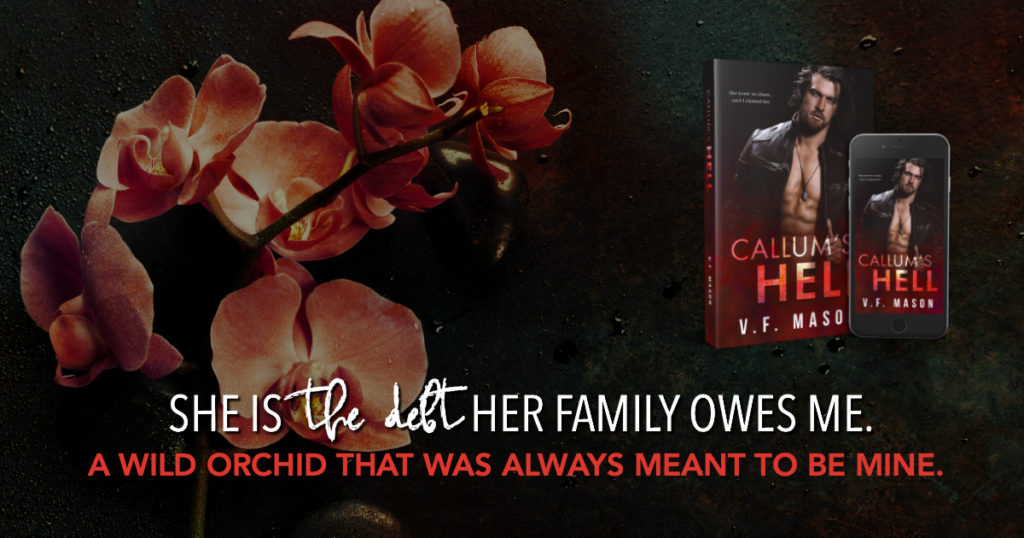 They say obsessions and insanity go hand-in-hand, but I have another theory.
Possession and desire go hand-in-hand, because they create such deep insanity a man is willing to eliminate everything and everyone in his way to get to what he wants.
I flick my fingers and knock two pawns from the chessboard, ready to strike again.
By the time this is done, there will be no one but the queen left standing. 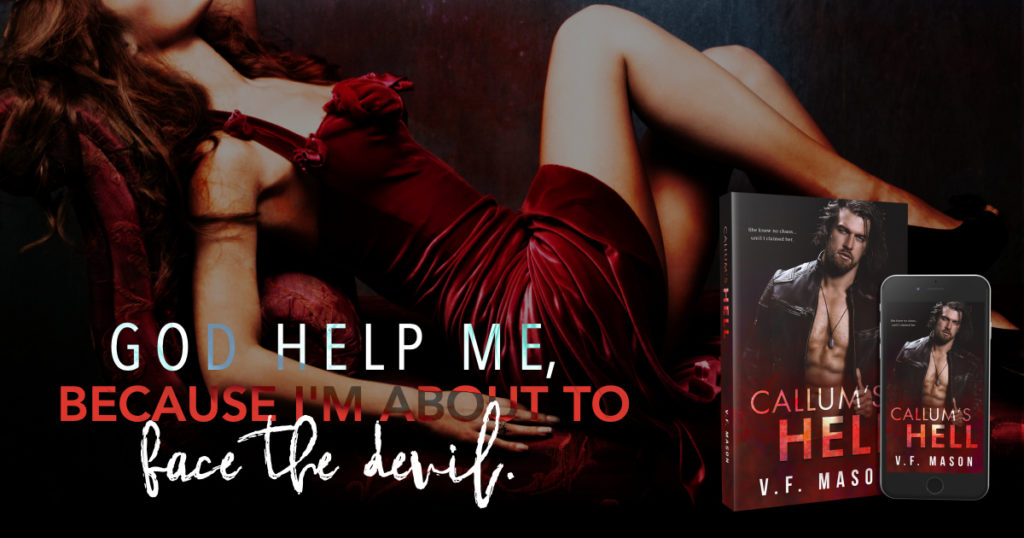 About the Author:
V.F. Mason always loved reading books and had quite a few fights with her momma over the genre she liked (romance, duh!) She studied filmmaking and thought that would feed her desire for stories, but that didn’t happen. Finally, when she was tired of all those voices in her head, she sat down and wrote a book. It was a huge decision to make and she thanks her friends and family for supporting her in it. When she is not writing, she can be found with her friends doing all sorts of crazy things or reading recent romance books that were written by her favorite authors.

She needs him to keep her safe. He doesn’t need her at all, but when it comes to wanting… oh now, wanting is a different matter entirely.

Get it ONLY on Amazon!!


Or read for #FREE in KindleUnlimited!!!

An ex-cop sent to prison for something he didn't do, Kurt Doyle knows from experience that nothing good ever happens on a Monday. So when his Grams hooks him up with a friend in need of a bodyguard, he knows better than to get involved… until the Little in Scotti Moore provokes the dominant Daddy in him. She's small, she's sweet, she’s innocent. She’s almost more trouble than she’s worth, and she's a librarian, for crying out loud. But she needs his protection, and even if she is everything he wants, he knows the last thing she needs is a man that brings more trouble.

This book was absolutely adorable!!

I really enjoyed reading about Scotti and Kurt. I thought they were such a cute couple. Kurt's hatred of Mondays (and eventually Tuesdays) was downright hilarious. Almost as hilarious as the bathroom scene.

I loved how patient Kurt was, even though he still exuded that dangerous possessive and commanding streak. The author was able to balance him out perfectly and I loved how Scotti responded to him without being overly bratty. She was more curious and that made me like her more.

This is my first read by this author, but definitely won't be my last.

Now she really couldn’t sleep.
Picking at Bat Bear now instead of her blanket, Scotti asked, “Is there someone out there missing you because you’re sleeping here?”
“Grams has late-night TV to keep her company,” he said. “She’ll be fine.”
“No, I mean someone like me.”
“I already told you, I’ve never done this before. You’re my only client. Go to sleep, Scotti.”
“No,” she persisted. “I mean, do you have someone… like me.”
“People who just get out of prison don’t get the luxury of having somebody,” he said. “They get to get their lives back together first.” His tone dropped into those low notes of warning that she was starting to recognize as preceding a threat to her sitting abilities. “Close your eyes and go to sleep.”
She closed her eyes, but her mind wouldn’t quiet, and so they only drifted open again a few seconds later. “You did have someone, though, right?” she asked, and even though he sighed again, added, “Someone like me? Once upon a time?”
“Scotti…”
“But you’re too good a Daddy not to have had somebody!” she protested.
She could practically feel the waves of disapproval rolling off him and that frustrated her. She was just asking a question. That he wouldn’t answer and satisfy this one niggling curiosity was killing her! He’d jumped on the Daddy train without her saying one word; there had to be a past Little out there who, once upon a pre-prison time, had looked up to this aggravating lout and felt safe because she was his.
Or maybe the Little was a boy?
“Was your Little a guy?” she asked. “Is that why you don’t want to talk about it? I’m not a mean person. I promise I don’t kink shame or judge.”
He sat up again. “Do you need a hot butt?” he asked, evenly.
“No, but—”
“Two,” he said sternly.
That stopped her. Her tummy and her butt both tightened sharply at the threat, but that minute tightening didn’t last beyond the knee-jerk shock of hearing it. “You can’t start at two,” she grumbled. “It’s illegal to start at two. What happened to one?”
“One was on the stairs earlier tonight when you sprayed me in the face with that female crap.”
“But that was hours ago! You can’t just pick up where you left off, you have to start over every time!”
Kicking back his blankets, he got up off the floor.
“How high do you count?” she asked in increasing nervousness as he came back around to her side of the bed.
“Nowhere near high enough to help you now,” he said, stripping the blanket back off her.
“No!” She all but threw Bat Bear in her haste to get away, but he caught the back of her neck before she could do more than roll onto her tummy. “No!” She scrambled to get her hands and knees up under her.
He killed her flight instantly when he said, “Fight me and I’ll use my belt.”

Coffee fanatic, human mom to four adorable furbabies, I am an International and USA Bestselling author of more than 160 titles over the last 25 years. I love writing contemporary, historical, science fiction/fantasy, paranormal, romantic comedy and steampunk romances.
I also write under the pennames of Denise Hall, Darla Phelps, and Penny Alley.
Be the first to get information on free stories, new releases, giveaways and prizes!
Join my newsletter! http://MarenSmith.com/newsletter/
Follow me on Bookbub for the latest in sales and special release prices!
Friend me on Facebook: https://www.facebook.com/AuthMarenSmith/
Follow me on Twitter: @authmarensmith
Friend me on Instagram: maren_smith
Follow me on Goodreads: https://www.goodreads.com/author/show/2886639.Maren_Smith
Posted by Randomly Me & You Book Blog at 9:12 AM No comments: